Winged yams are the largest of the Dioscorea species with huge tubers that can weigh up to 30kg.
They are extremely hardy, highly productive and versatile to cook with.
The common name, Winged Yam refers to the ‘winged stem’, which has wide ridges along the angular stem. The heart shaped leaves are opposite on the stem. This identifies it as edible as poisonous yams have alternate leaves.
This species has been cultivated for centuries and wild species of D Alata are not known anywhere in the world. It originated in Asia where it spread to the African continent and then to the Americas through the slave trade.
D Alata is the most cultivated species worldwide
The lumpy tubers vary in shape and have a purple-brown surface, but when cut the starchy flesh is purple or sometimes white.
Yams are much easier to grow and more productive than potatoes in the tropics/subtropics.

A starch root crop yam can be cooked in any of the ways potatoes are cooked.
The purple yam is great made into desserts or prepared in any way that highlights the vivid violet colouring.
If you will not be cooking the whole yam, just slice off what you need and dip the cut part in dry ash to seal the wound.

Yam is a perennial but is most often treated as an annual and harvested and replanted annually.
Day length of more than 12 hours is preferred during the early growing season (late Spring to early Summer) since this encourages vegetative growth. Day lengths of less than 12 hours, towards the end of the growing season (late Summer to Winter) will encourage tuber formation and development.
The vines die back in Winter and the tubers become dormant. They reshoot and resume growth with the first rain after the soil warms up in Spring.

For best results grow in fertile soil with plenty of organic matter
A friable and deep soil allows the tuber to expand in the ground.
Is drought tolerant and requires excellent drainage and does not tolerate water logging.
Improved yields if grown on a trellis and the vine are tipped to keep growth under control, which encourages production of tubers.
Hilling the plant up also increases tuber size.

Plant in Spring when tubers start to shoot.
Chop tubers into large pieces with a couple of eyes on each piece.
The crown is the quickest part of the tuber to shoot and gives the highest yield.
Plant 10-15cm deep in a mound from 70-100cm.
Winged yam can also be propagated from small axillary aerial yams that grow occasionally in the leaf axis of water-stressed plants during drought conditions. These rough skinned aerial yams produce vigorous plants and are a good way to share planting material with others, as yams don’t produce seed.

Winged yam will produce small axillary aerial yams during drought conditions. These produce vigorous plants and have weed potential. Plants should be kept contained and every axillary yam should be collected.

Harvest mature tubers for storage in Winter when plant growth has stopped and the leaves begin to yellow
When harvesting yams, dig away from the tuber to avoid injury to the tuber. Tubers are easily bruised and will rot if damaged.
Tubers can also be harvested early for eating from 5 months. This is called ‘bandicooting’. To do this dig and carefully remove the bottom part of a tuber in dry weather. If you do it in the wet, there is a risk of the plant rotting. The upper part will continue to grow. Second growth produces small tubers that are often used for planting as seed yams.
Undamaged yams can be stored for several months.
After harvest cure tubers in the shade until dry.
Any cut pieces should be dipped in dry ash to seal the wound to avoid rotting.
Store in a well ventilated dry cool building.
If tubers stored for eating sprout in storage, rub off the sprouts. 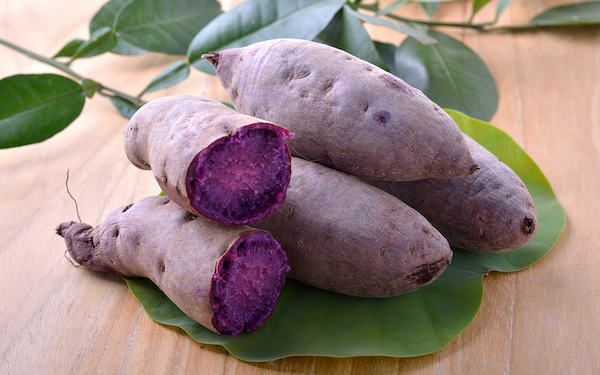